For Homeless Advocates, a Discouraging Lesson in Los Angeles: Money Is Not Enough The empty lot on the corner of 1st Street and Lorena Street in the Boyle Heights neighborhood of Los Angeles, where a proposed housing complex for the homeless has been blocked by a City Council committee. Credit Emily Berl for The New York Times

LOS ANGELES — Finding $1.2 billion to build housing for the homeless — as voters here did last year by overwhelmingly approving an increase in their own property taxes — may turn out to have been the easy part.

Los Angeles is now witnessing a fight that demonstrates why developing housing for the homeless has been such a tough challenge across California, even when there is funding, good will and an open piece of land. A proposal to build a 49-unit shelter in the Boyle Heights neighborhood has been blocked by a City Council committee after running up against a wall of opposition.

Opponents invoked environmental concerns in seeking to derail the project, pointing to an abandoned oil well on the site, even though it has long been dormant. They also argued that its proximity to a lively restaurant and shopping mall catering to the largely Latino community there would be a source of disturbance for homeless people trying to start a new life. José Huizar, a City Council member who blocked the complex, said that while he supported the construction of housing for homeless people, the nonprofit group promoting this project was trying to muscle through a plan over well-grounded neighborhood concerns.

“You cannot force a project onto a community at all costs,” said Mr. Huizar, who was also one of the leaders of the campaign to pass the homeless housing bond. “A majority of people who live around the project were opposed to it. The people who are in favor of it live someplace else.”

For homeless advocates who had been glowing after November, the unanimous vote in August blocking the project by a Los Angeles City Council land use committee, headed by Mr. Huizar, was a discouraging setback. It was also a reminder that some of the toughest battles lie ahead as Los Angeles moves from the task of persuading voters to raise money for the homeless to the logistics of getting the money spent.

The project, which is now stalled, is being pushed by A Community of Friends, a nonprofit organization that has built housing for 2,400 homeless people across Los Angeles.

“It puts it in jeopardy,” said Ruth Schwartz, the executive director of Shelter Partnership, a nonprofit homeless advocacy group. “We have to build the housing. We can’t just use existing stock to get people off the street.”

“We always knew that political will had to be there,” she said. “Nothing can happen without political support.”

Christina Hayward, 37, spent 12 years living on the streets with her husband and two children before moving into a Community of Friends housing project eight years ago, a move that she said had turned life around for her family.

“I hear about, ‘Well we have the funds to do it,’” she said. “So why haven’t you done it? Take an empty lot that is just sitting there, that no one is using, put a building on it.”

“No one wants to take these people off the streets because of the way they look,” she said, sitting with her daughter, Kaylee, 18, who was born while Ms. Hayward was homeless. “Well at one point, I looked like that. At one time, I was that homeless person.”

Mayor Eric M. Garcetti said the passage last year of the housing measure, known as HHH, demonstrated the breadth of support for confronting the homelessness problem. He said the battle in Boyle Heights was just the latest in a long history of development disputes that have roiled the city. 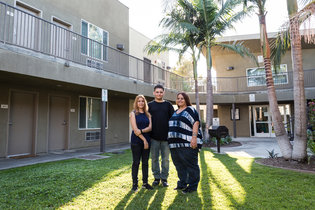 “The challenge to anyone who says ‘no’ is they have to find a place to say ‘yes,’” Mr. Garcetti said.

The 49-unit project, called Lorena Plaza, would rise on a dusty lot across the street from a Pizza Hut and a cemetery. About half of the units would be for residents with mental illness. The site had been a staging area for construction of the Metro Gold Line, which now rumbles by. Lorena Plaza would be next to El Mercado, a Mexican-American community institution — with shops and a top-floor restaurant with mariachi bands — whose owners have been at the forefront of the opposition.

“We have mariachi music playing,” said Tony Rosado, the owner. “We have cars coming down the alley. There’s a metro rail that’s exposed. Anyone can literally walk onto the tracks. It’s not an ideal location for the residents.”

“We are in favor of construction of housing for the homeless,” Mr. Rosado said. “But really, the laws need to be followed to protect everybody’s safety. And it would be a travesty if you start construction on a site that has an abandoned oil well without pinning down whether it’s safe to do that.”

The standoff is taking place as Southern California is struggling with a homelessness crisis. This year, the homeless population in Los Angeles County jumped 23 percent, to 57,794 people, over 2016, according to an annual survey released in May by the Los Angeles Homeless Services Authority. A problem that once was largely concentrated in Skid Row in downtown Los Angeles has now spread across the region: There are outposts of tents along Sunset Boulevard in Hollywood, and clusters of people living on the beach in Venice.

The housing bond needed a two-thirds vote to pass, a formidable hurdle for taxes and bonds here. But that was not the only sign of a clear public desire to confront the problem: Six months after that, Los Angeles County voters authorized a sales tax surcharge to fund over $3.5 billion in rent subsidies and services for the homeless.

“I think Los Angeles is ready,” said Dora Leong Gallo, the chief executive of A Community of Friends. “But there could be disconnect between what it means to support these efforts to end homelessness and actually getting them built.”

The $1.2 billion is expected to build about 10,000 units of housing over the next 10 years. Lorena Plaza, which would cost about $23 million, would qualify for the funds.

Given that, the players in this — A Community of Friends and the owners of El Mercado — are coming under increasing pressure to try to work out some kind of settlement.

“We’re in the midst of a homelessness crisis,” said Mike Feuer, the Los Angeles city attorney. “If there’s any way this project can move forward, it should.”

Ms. Gallo said that for all the opposition in Boyle Heights, that “doesn’t mean we are going to have trouble in another Council district.”

“But here’s this nagging thing in the back in my mind,” she said. “If it’s happening to us, and we are one of the larger nonprofits who do this work and have been doing this work for 29 years, what does that hold for other organizations that don’t have the depth of experience that we do?”

Mr. Huizar said he was confident the housing would be built, but said the standoff in his district was a reminder of the obstacles ahead. “Bottom line is we’re going to see these challenges more,” he said.