Off
Heard on All Things Considered 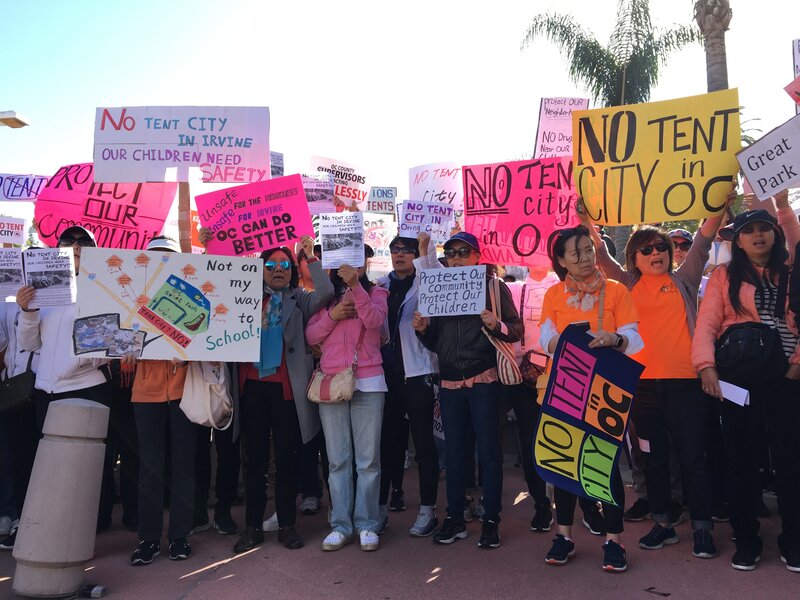 Patrick Hogan has never been able to rebound after losing his home during the financial crash 10 years ago. He worked temp agency jobs. But $10 an hour jobs doesn’t cut it in one of the most expensive corners of the nation.

“Fortunately I had friends I could stay with for a few months, but when they sold their home, that was it,” Hogan says.

He ended up camping along with hundreds of others in a sprawling tent city in a dried up riverbed.

“My experience has taught me one thing,” Hogan says. “The most discriminated group of people, at least in America, are the poor.”

Hogan could easily be the poster child of the Southern California homelessness crisis. As housing costs skyrocket, and the income inequality gap widens, the problem has spread from more traditional enclaves like Los Angeles into affluent coastal areas in places like Orange County.

Orange County is now under federal pressure to address what homeless advocates in court filings have called a humanitarian crisis. A federal judge agreed. The tent city along the Santa Ana River where Hogan once stayed was cleared a month ago. The county was ordered to pay for hotel vouchers while new, permanent shelters are found or built.

Those vouchers are set to expire this week and it’s not clear where people will go.

The county’s proposed plan to relocate homeless people from Santa Ana to temporary shelters on county land in more affluent coastal cities like Irvine and Huntington Beach drew well-organized protests. On Tuesday, chartered buses ferried hundreds of local residents to protest outside the Orange County Board of Supervisors meeting.

They chanted “No Tent City!” and waved signs that read “No Drugs Near Our Schools.”

“Not all homeless people are bad but certain ones are,” said Cheryl Nakano, of Irvine. “It’s just not safe.”

Nakano said this wasn’t a “not in my backyard issue.” She wants to see the county find a long-term solution to help the homeless: “Not just dumping them in tent cities.”

Some protesters also said tackling homelessness has never been a top political priority in Orange County, one of the richest and traditionally more politically conservative counties in the United States.

“We’re all sorry,” said Todd Spitzer, Orange County supervisor, at a public hearing Tuesday. “We know we can do better, we’re a smart county, we’re an influential county, the nation is watching us.”

But with protesters chanting outside, the county voted to rescind its plans — for now — to build three new emergency shelters. After the 4-0 vote, there was a chorus of boos mixing with loud applause.

“Housing is not a human right,” said Arthur Schaper. 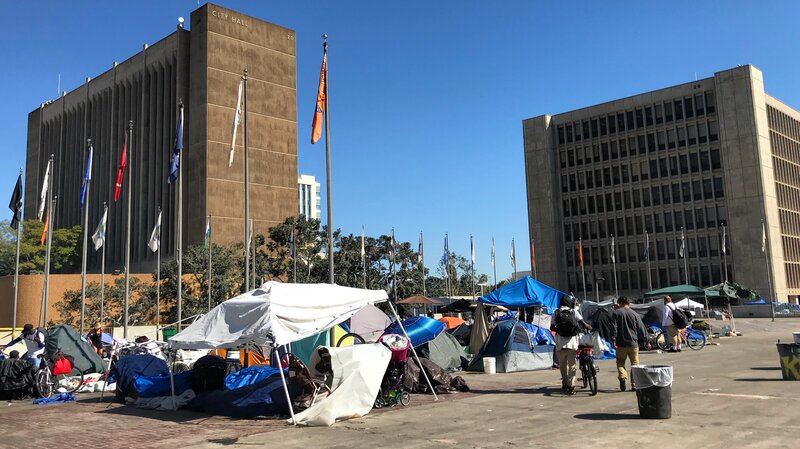 Orange County officials rescinded plans to establish three temporary shelters on county land near the ocean. Two blocks away from the hearing in Santa Ana, a sprawling homeless encampment remains in front of the courthouse.

“Expecting the government to solve every single problem is precisely why we are in the mess we are right now.”

The supervisors did commit to fast-tracking spending of more than $50 million in previously unspent dollars to help the poor.

Meanwhile, a few blocks from the hearing, a large homeless encampment of worn tents and blue tarps remained intact in front of the Santa Ana courthouse. A policeman in a nearby squad car monitored the camp. Nearby, an official temporary county shelter was open and bustling inside a converted bus terminal. Dozens of people slept on row after row of cots. Some of the shelter’s residents had stacked up their backpacks and shopping carts full of their belongings outside the entrance.

The temporary shelter was first opened in November 2016, and county health officials say demand has quickly outpaced the space allotted.

Patrick Hogan said he stayed there for a few nights, but it was too crowded.

“It is the most disgraceful thing in a county like Orange County, one of the most affluent counties in the country,” he said.

Hogan says he has recently been able to line up housing on his own, and he plans to move off the streets soon. It’s safe to say many others here won’t be as fortunate.